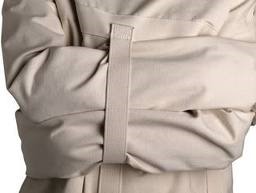 Get a white van, maybe block out the windows except for the front, have two Jackass members driving the van, stop at a stop light or a stop sign in a busy residential area where there are lots of pedestrians and cars. then have a single person in the back of the van break out the back doors on the van in a straight jacket and run throughout the neighborhood, the two people driving get out and lead a chase. Go to a busy park with lots of people and ask around if they have seen a person wearing all white with a white straight jacket on. Then leave and film the guy running in the distance. Film the peoples reactions.
Plot of this skit is that you are transporting a highly dangerous and mentally insane patient to a more secure facility, when he breaks out of the sealed van at a stop sign or a red light and tries to escape. Then they chase him around the neighborhood into some parks and loose him. Then the people who were transporting him, people of the jackass crew, go to a busy park and ask if they have seen a man wearing all white and has a straight jacket on. Explain to them that he is very dangerous and that if they see him they shoudln't try and capture him. Soon after have him run by the people, falling and what not, constantly looking over his shoulder for the people who are chasing him.
This is a prank on the general public. Film their reactions and enjoy. Don't attempt this at home.
Props: Van (white) with blocked out back windows and maybe a metal bar on the back to make it look more like a transport van. Straight jacket (white preferably), hospital clothes, the people transporting should look eight something similar to a security guard or dressed more like doctors (either or).