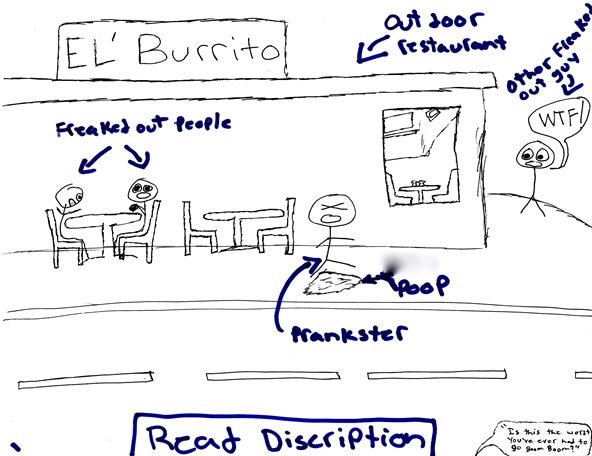 Summary:   this is basically a prank within a prank. The person (who does not know it's a prank within a prank) will go to a Mexican restaurant (or any place that serves spicy burritos). It must have an out door seating area, like a sidewalk. He sits down and starts to enjoy his spicy burrito and half way through it he starts to make noises as if in pain, he gets up and shouts "oh god that burritos going rightt hrough me! Ohhhh!"  He stands onthe sidewalk and just starts shitting. At that moment an old lady (actually a person made up to be an old lady who is in on it) comes walking up and slips and falls due to the shit on the ground. A police officer and his partner (who are all in on it) passing by gets out and radios for an ambulance and arrests the person who shit on the floor. (Who believes this is all real). The one officer stays with the old lady as other takes the prankster to the interrogation room at the Police Department where he gets intensely interrogated and a bit smacked around. He is informed that the old lady died and he is going to be charged with murder. After a little more suspense Johnny Knoxville kicks the door open wielding a super soaker saying " i've come to save you!" then begins squirting him in the face as he laughs.. END

you must pick someone that does not know the second part of this prank. As far as they know the prank ends with him shitting on the sidewalk and leaving.Pick a restaurant that has an outdoor seating area on a sidewalk where people can walk by.

decide how you want to make the "shit". Could make a bag of a mixture of stuff that looks like shit that can be stored in the clothing and released when its time.(or use Dave England's amazing ability to shit on command) The Person should wear shorts to let the shit shoot down their leg and onto the floor.

make sure everything is in place for the second part of this prank like the old lady who is actually a young man made up to be an old lady. And the arresting officer along with his partner.

after he "shits" on the floor the old lady slips and he is promptly arrested and taken away before the "ambulance" gets there (no need to actually have an ambulance since he's taken away quickly.. but it would be nice to have one)