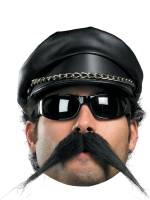 Using a location thats already being utilized, It could be a house or an apartment, mount cameras in various hidden areas throughout. Some at chest level and some up near the ceiling for good shots. Be sure that the windows and doors can be locked FROM THE OUTSIDE.

Enter this location with Ehren McGhehey and possibly two other Jackass cast members, once inside the other two strip Ehren down to his boxers (or possibly less)  then leave the location quickly with his clothes, locking him inside.

Let him wander around testing the locks, realizing hes stuck inside. Several quiet minutes later, enter a dozen large gay male dominatrixes dressed in the appropriate apparel (leather and studs, for fear and comedic effect) and carrying things like spanking paddles  and whips

soundtracked to loud, aggressive music these men chase him around the apartment, or house attempting to have a "good time" with him. Because he'll practically be naked it should be hilarious to watch, especially if its accompanied with angry music like slayer,  shot fast paced, simular to scenes like the golf cart crash up derby you guys did. Eventually, after watching him be terrified for several minutes they could just leave him to wimper in a closet.

The only wild card is that he might actually go for something like this, so substituting him with another member might be a good idea, I dunno their personalities as well as you guys, so the runner up in my opinion would probably be Preston!