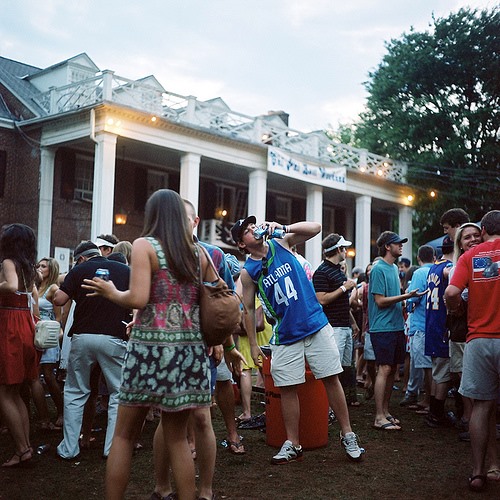 Crashing a frat party would be the type of prank that the guys of Jackass could pull off, like no others.  My idea would be taking a boring overdone prank and cranking it up a few notches, like a jackass prank on steriods.  Fraternities at the University of Alabama are very serious about their parties.  If you are not on the list then you have no chance of getting in.  I am assuming that all school's greek systems are the same.  That reason alone makes it a challenge.  I am suggesting that they guys from Jackass dress up like old men and bust in there talking trash about all the brothers.  Since the gys are so well know they would have to switch up the costumes either as old men/women, crazy italians, or just unpleasant people (something very stereotypical).  They should go into their house causing as much trouble as possible and get the frat brother's all riled up.  Doing all of this to lead up to the main prank of the night.  To end off the night/before getting kicked out, hijack the sound system and put on Mickey Avalon's My Dick and go to town on the fraternity guys.  The Jackass guys start taunting the frat brothers based around the lyrics of the song.  Making it so the old men are showing up the younger guys.  Having them dressed up like old men would be the ultimate because it would be creepy old men going into the frat guy's house and talking so much sh*t about their dicks.