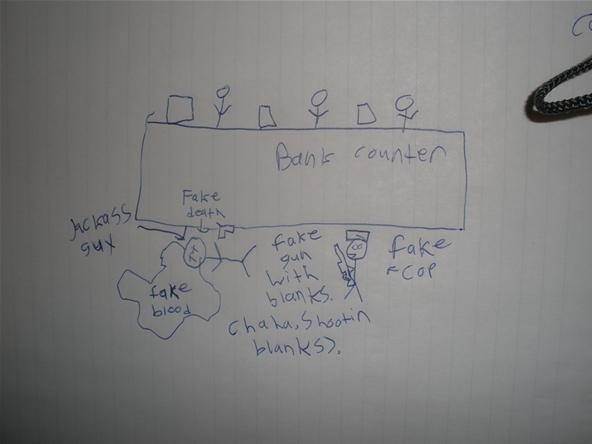 Have one of the most beloved characters on jackass(steve-o,jhonny,bam) fake his death for the world to see, have them pretend to rob a bank and have a cop in there at the same time, so when they hold up the bank they get shot and since its a bank there will be cameras so thats how they got it on tape, remember this will all be fake but nobody will know. or you could fake a car crash and it would have the crew in there about to go film but only 1 would die and the rest would b just hurt.or somehow have them fake die during a stunt they were shooting. another variation would be to maybe somehow not tell some of the crew like let jeff find out on his own because he will freak since thats alot of his income, OR after your death is faked get onto prestons or weemans myspace/twitter or sumthing saying "now that hes gone its my turn to shine" setting them up then having detectives and cops swarm there house. of course this will be all over the news, well the death should be anyways. P.S just though of something even better, film the 1st ever live jackass stunt streaming live on the internet and tv and that would be the perfect time for a stunt to go "wrong" leaving a jackass in critical condition or even better "dead". everone said they want 2 be apart of jackass, now everyone can be. even if it is a sick joke, haha