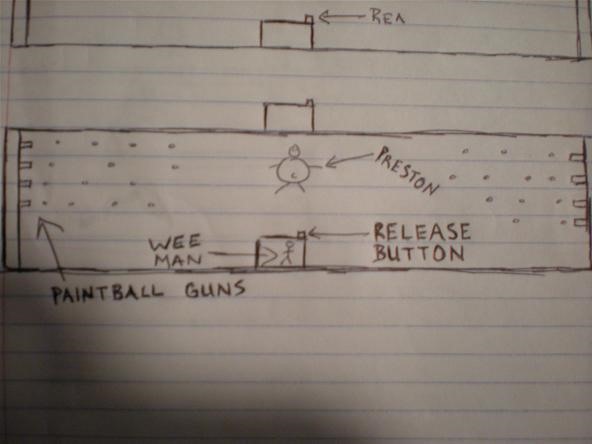 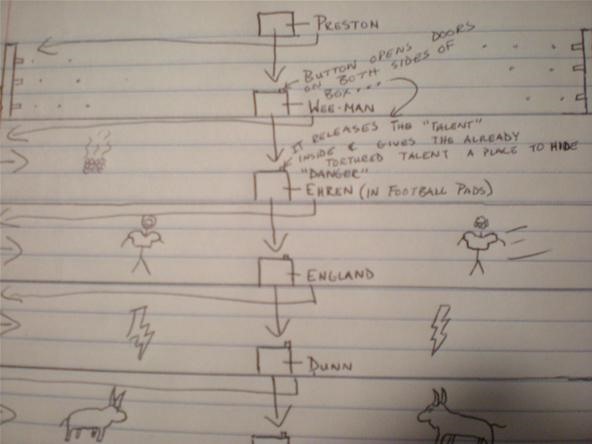 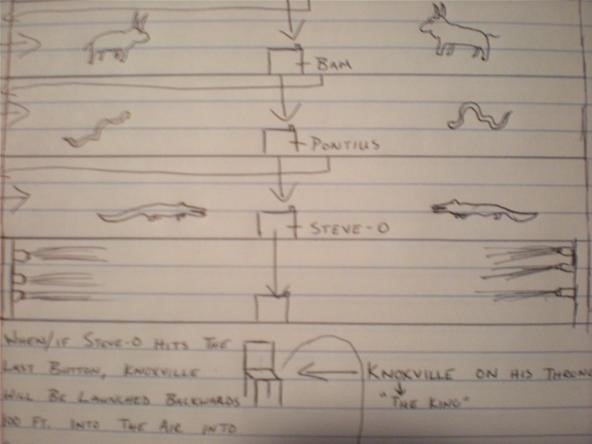 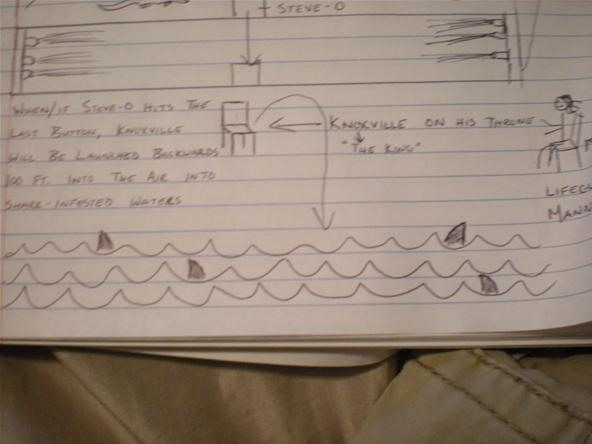 In this prank, all of the cast members will be involved because let's be honest, it's funnier when all of the "talent" is getting hurt.

The premise is that each one of the cast members will have to complete a stunt in order for the next one to start. There will be eight individual stunts -- one for Preston, Wee-Man, "Danger" Ehren, England, Dunn, Bam, Pontius, and Steve-O. Each cast members will start in an enclosed box. Once their box opens they will be released into a 60x60' area that will be walled off on all four sides. Their only escape from each area will be reaching the other side and pressing a button. The button will open up a new box for them to get into while releasing the next cast member from that same box.

Preston Lacy: Preston will be the first "Jackass" released. He will have to run to the other side of the 60' area while being shot by paintball guns on parallel sides. There will be approximately 6-8 gunmen on each side who will be shooting through small cut-outs in each wall.

Wee-Man: Once Preston reaches his button, Wee-Man will be released. Wee-Man's objective is simple: run across to the next button...on a bed of hot coals.

"Danger" Ehren Mcghehey: Once Wee-Man releases Ehren -- who will be in full football gear -- there will be 5-10 football players (linemen and linebackers) waiting for him on the other side. Ehren will have to get through them and press the button.

Dave England: Dave will have to get across the 60 feet as quickly as possible...because the floor he's running on is going to be electrified.

Ryan Dunn: Now we move on to the animal portion of the prank. Once England releases Dunn, Ryan will have to gets through his area which will have anywhere from 5-7 bulls in it.

Bam Margera: Since Bam-Bam is afraid of snakes, it would only be appropriate that his area is filled with snakes...non-venomous ones of course.

Chris Pontius: Similar to the previous two stunts, but Pontius will have to get past roughly 50 alligators.

Steve-O: Steve-O will be the last of the cast members to go. This will be similar to Preston's stunt, except firing through small cut-outs in each wall will be approximately 10 fire hoses.

Johnny Knoxville (the King): If/when Steve-O reaches the final button, Knoxville -- who will be sitting on his throne -- will get launched backwards approximately 75 feet in the air in shark-infested waters. There won't be any Great Whites, but something dangerous.