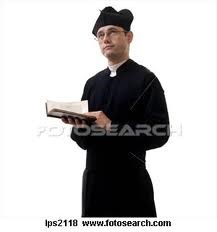 Possibly have a couple kids dressed as choir boys to tag along with him, just for extra creepyness . . . kinda like when the kid was with the Old Man in Number Two.

It's all about the reaction from people, just like his Old Man stunts. There is just too much going on with Priests and sex these days, it has to be done.