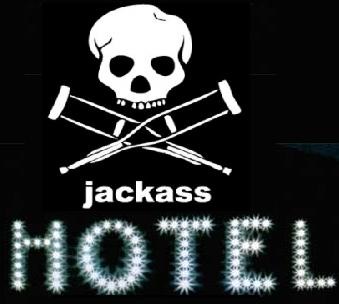 ~Shampoo Sink-Up
Before you wake the person up go in to the bathroom empty out the soap and fill it with pee. take his razor and shave your balls or ass with it (Save the hair; use it in the food or part of the show). instead of placing ketchup packets under the toilet seat put poo there. and if possible some how rig the water that comes out of the sink and shower to come out sugar water. (so that bugs will follow his and that uncomfortable feeling of being all sticky all day).

~Cut Short Clothes
Before you wake the person up get all his clothes and cut them up and just mess them up by peeing on them or writing on them (let them dry). just mess them up some how. while that person is in the shower put them back like them had them so they won't catch on.

~Gross Food
Go into his kitchen before he wakes up and just make the food nasty. spit in the milk, rub your balls all over the bread, fart in the cereal, etc. or if he is at a hotel and they have room service, while he is in the shower order it for the person. before the bellhop gets to his room slip him/her some money and take it up yourself. before you get to the room spit on the food, touch your balls then touch the food, etc. then serve the food to him. Do that to his lunch and dinner. (optional: https://jackass-3d-contest.wonderhowto.com/news/refreshing-sh-0119778/

~Home Invasion
While he is at work go into his house/room and set traps. Smear poo or something sticky under all of the door handles that includes dressers and anything with a handle, Mess up the tv so it only shows one station (other suggestion :https://jackass-3d-contest.wonderhowto.com/corkboard/living-tv-0119775/), replace all the bulbs with painted ones or very bright ones, under the mattress take a dump so it will make it smell in there, Glue the remote controls to the table, chain the phone so that you have to bend down to use it, put marbles under the rug, and anything else that is funny.

~One More Surprise
At the end of the day when he went to sleep scare them with their biggest fear (ex. fill Bams bed with snakes or carry Preston to the roof and leave him up there)
or do this, https://jackass-3d-contest.wonderhowto.com/news/convict-sleepover-0119776/

(The links are some other ideas by me and my friends)

you can also do this to the house/room:
The tv put it on a porn site if they have guests coming over. Put super glue on main door handle right before they walk in. Stick fish under the bed, dead rotting fish smeared with rotted cheese and bananas. Instead of cutting clothes sew the opposite pant leg halfway up so he puts one foot in and falls as he puts the other in and same with the head hole or armhole of the shirts and cut little holes in every sock so they eventually grow as the day goes on and instead of tying to the bed shrink-wrap them with rotted food and glue and flour and suit in between them and the wrap