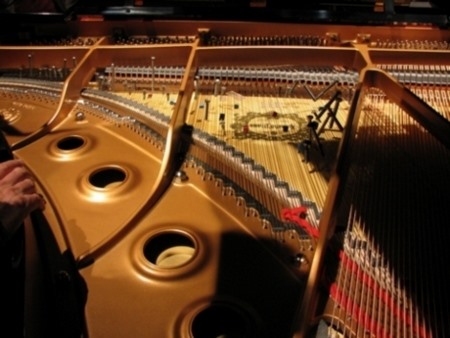 Take four or five of the jackass crew (or more if so needed) and line them up against a white wall.  Facing the wall, with their butts exposed.

Build a set resembling a very large scale piano. Behind each of the men is an over-sized piano mallet covered in different substances (flour, tar, pee, etc).

Take these over sized mallets and wire them electronically to the keys to a real grand piano.  It can be any or all of the keys or foot pedals.

As Lady Gaga plays away, the connections are made on the real piano sending signals to the large mallets causing them to intensely slap/hit the crew in their butts.

The more exaggerated everything is the better.

You could also have the crew turn around (blind folded) and have the mallets hit them in their groins, however this would cause excruciating pain, I'm sure, thus lessoning the time of the prank

If Lady Gaga doesn't want to do it, I would also settle on David Bowie, or a professionally trained classical piano musician.