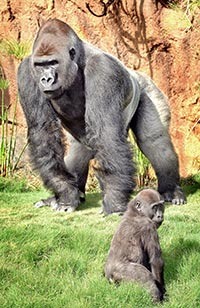 My prank will be on steve-o and chris pontius. This prank is also like the taxi prank because it is a reverse prank. Steve-o and chris will think that the prank is they will be pretending to get attacked by a man in a realistic gorilla suit, like the gorilla suit from an episode from mtv's punked. The real prank will be that a Herd of full speed bulls will run out into the gorilla enclosures and we get to watch Tour guides Steve and Chris run for their lives! Also there will be a pit of water covered by a floating patch of grass that they will fall into as they run from the bulls. This prank is a great idea because it is hilarious and it brings the re-occuring theme of bulls into the 3rd Jackass movie. -Jack Johnson

(the picture is a pic of the L.A Zoo Gorilla enclosure)