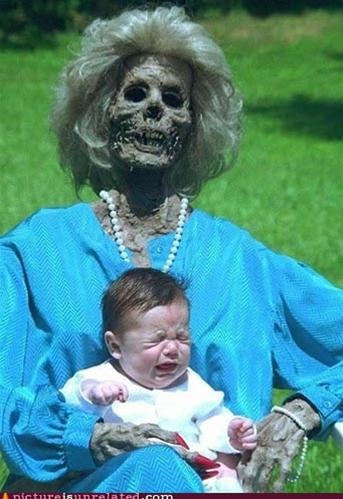 Basically, Buddy and his Grandma are out to lunch. When she doesn't finish her sentence halfway through their talk, she starts to get a little drowsy, seemingly. She is, in fact, dead. Buddy tries to wake her up, quietly at first, then a little louder. After holding her hand and weeping (hopefully, if done correctly, people should be catching on and feeling heartbroken) silently, Buddy feels her rather expensive ring, and also her other jewelry. In a hurry, Buddy grabs her ring and pockets it. Her necklace is not easily taken however, and he struggles wth her corpse for a minute or two. He then procedes to pocket her necklace and grabs her purse and heads for the door. When all is said and done, the prank should last about 10 minutes with about 6 minutes of conversation time leading up to the untimely death. It would also be helpful if their cnversation was about Buddy needing money for school and Grandma can say something like, "You'd just spend it on booze and drugs." She could say this all rather loudly for neighboring customers and diners.

I would write the script for it, but I think it speaks for itself and in a situation like this, I wonder if improvisation works better.

There it is, in a nutshell. So, please let m get you guys coffee and get hit in the nuts on camera. I'd appreciate your torment. Can't wait for the film.