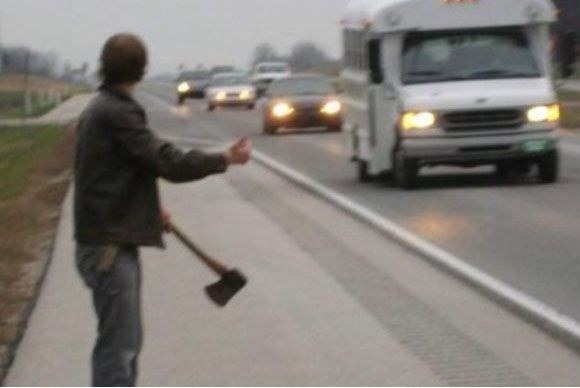 Get a bunch of the guys in a decent size van and travel somewhere to go film a stunt or a prank, or so you say. Have one or two guys not know about the actual prank you'll be playing on them during the trip, thus making them the victims. While you're driving, have an actor play a hitchhiker on the side of the road, kind of in the middle of nowhere.

The Hitchhiker will seem friendly and whatnot until like a few minutes later when he turns on everybody and points the gun at the driver telling him to go to a certain location. The gun could be real, or it can be fake, but if its real, make sure to shoot it at like the roof of the car so that they know its real. If it's fake, shoot it at a person in the car who is in on it, by using blood splatter effect.

Everybody should be acting scared at this point. Now I know you guys prank each other all the time so the victims might be a little suspicious, so for extra effect, have one of the guys who are in on it jump out of the car while its moving. The reason could be that the Hitchhiker made him jump out so he can sit further back so he can see everybody, or have it be because the person didn't want to die. Obviously not at too high of speeds, but fast enough to where its believable. And don't say that's impossible because Bam did it no problem in the cky videos.

Now hopefully by now everybody should believe that this is "real" and be worried. The hitchhiker will now tell where the driver to go, because he has to pick up "some supplies" making it very suspicious. Drive to an abandoned place, where other people who are in on the prank will be waiting secretly. When the victims get out of the car, other people who are in on it should dump and spray a lot of piss on the victims, because that will be the last thing they'll be expecting. And why stop at piss, have some poop waiting too. Yes label someone as the "poop thrower." If you could have a piss water hose, like a firefighter hose that shoots piss, nothing would be more incredible than that.