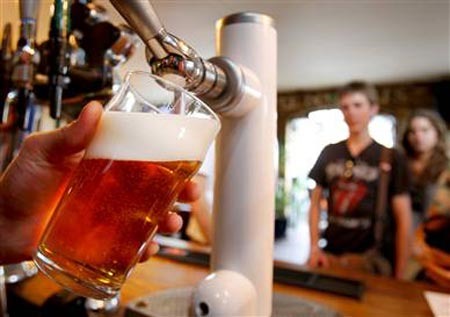 Here's a winner!  You have to go to kind of a backwoods ass town where Jackass might not be too known to make this believable.  You set up sort of a small "village bar" in the middle of town where there's a lot of foot traffic.

You'll bring a gathering of kids with various heights and let them in on the stunt.  The "bar" has to be set at just the right height to where some kids can see over the bar counters and some can't.  The stunt is to set up an outdoor village "beer bar" that is only served draft tap style.  Kids are just sitting around on barstools watching kids tv presumably drinking beer.  Instead of beer, though, the drink in the taps will be apple juice.  Add a little whip cream in the taps to give the apple juice a beer foam effect.  During the stunt, if anyone asks to smell the beverage, we will deny them until the end under the alibi "it is unsanitary and against health regulations."  This will cause a whole new commotion of "So underage drinking is ok?"

The idea is to have the actor-kids be walking by with their (also-knowing) parents and "randomly" stop at this kids "bar".  Knoxville, Bam, and myself will be dressed in hillbilly garb serving the kids the fake beer.  Our ruse will be "If you can see over the counter, we will serve you."  That is why we need kids of varying heights so some will be served and others will be denied.  The unsuspecting townsfolk will be shocked and horrified in disbelief and we'll all get a lot of good laughs in the end!