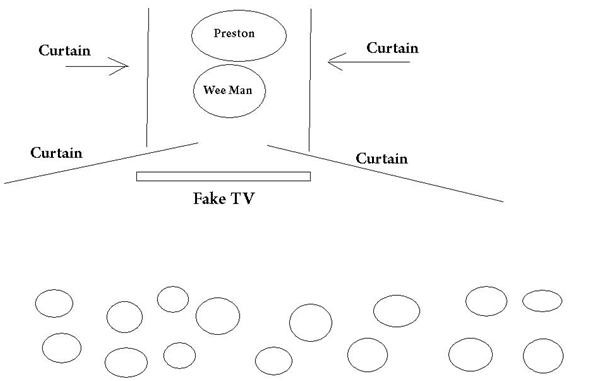 Hold a free demo of the 3d technology in jackass 3d on the street. However the TV will not be a real TV. It will simply be stunt glass with the jackass logo on it.  Or it would be better if you had a freeze frame on the screen of wee man with Preston behind him.

The picture would perfectly line up with the real background that is behind the actual TV. Put curtains up around the side so it looks more like a display.

Have everyone put on the 3d glasses.

Once their 3d glasses are on have Wee Man jump out of the fake TV and be running away from Preston.

that is just brilliant !!! HAHA : P you coul create a build up intro in 3D then wee man coudl burst out of the screen and do a whacky stunt on the stage with preston with music and everything like the real film .....but ..erm? ...real!! hahaha.

film the audience reactions, say it s a special public premiere and the audience will be filmed. that way you don't have to ask for release forms from everyone.

Look up Sh*t Snowcone for the win!

Look up Sh*t Snowcone for the win!

Hey James way to be a dick and try to push your idea.

Scott thank you for the support, but I think it would be funniest if wee man dives through the screen and then preston dives through too but he gets stuck and he has the TV around his waist and keeps chasing after wee man as they run out of the building

Hey Griffin it's called promotion you moron because this is a contest. So #$%@ you.

Doesn't mean you're not a dick, But I like my idea to do all the promotion for itself. The cream rises to the top don't have to shove it down people's throats.