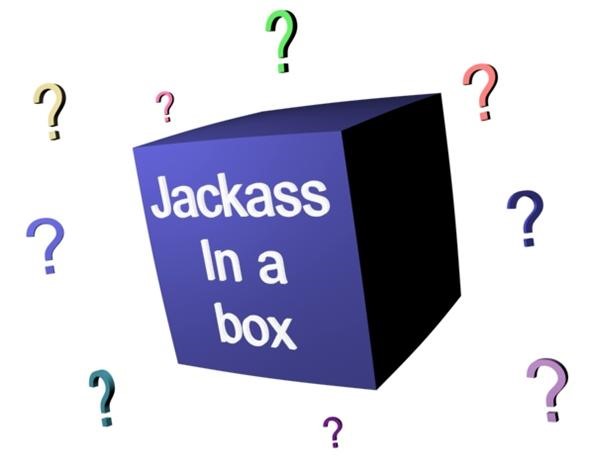 The concept of "Jackass in a box" is for a jackass to walk into a special box, where he is strapped into a bucket seat and cut off from the outside world, his buddies then load this box onto a truck headed for a new secret location, this could be anywhere crazy and intense, for example the box could be taken to the top of the largest ski slope and then pushed down the hill after being filled with donkey poop, or maybe the box could be attached to a roller coaster ride.....after being filled with donkey poop ?: ) Where ever it will be, when the box door opens, the jackass is totally shocked at where he has ended up, freaked out with poop in his pants and hair.. : P

a bit more in detail:

One of the jackass team walks into a special box where he is strapped to his seat ( could be a  bucket seat with 4 way chest harness like a racing driver), he is then cut off from the outside world, unable to see, smell and unable to hear as he will have ear plugs and loud music in his headphones.( although 2 way communication via radio is possible and a camera inside the box: )

Once the jackass is immobilised, the box is then carried onto a truck and taken to a surprise new location with all his pals following in separate vehicles. This new location can be anywhere, a pre planned set-up with multi-channel cameras and mic's to capture all the action.The jackass of course will have absolutely no idea where this new location will be, or what will be in store for him once he arrives, this is what makes this set-up so funny for us viewers and so intense for the jackass as it greatly amplifies the suspense.

The surprise location will most likely be somewhere totally insane knowing the ideas of the Dickhouse crew!

here are a few Examples where the box could end up.

1.He could be ejected out of the box backwards and with a big surprise sent sliding down a very long dark tube water slide?

2. Perhaps he is kept inside the box strapped to a harness/seat as the box is filled with donkey poop and then thrown off a bridge with a bungee attached? ( cameras film his reactions as he suddenly and unexpectedly free fall's at 0g ...then bounces around with all the donkey poop flying around his face. : )

3.( for this one the jackass is initially put in the box wearing womens knickers and peep-hole bra) As the box is opened in the middle of a very large dog pit with treacle and marsh mellows poured onto the jackass's half naked body, where he will have to run around the pit screaming trying to try and find an exit, of which there isn't one; and gets licked and nibbled by friendly yet very frisky/sexy Labrador dogs. (that is until he says the magic word: Oklahoma).

4. Attach the box to a roller coaster cart with poop thrown inside the box. he will have a safety harness on already of course but will freak as he does a loop the loop in the dark with poop flying around his face.

5. Many of the ideas on the cork board would make great locations too.

Where ever the new location will be, it's a Double Whammy! Because not only do you get the stunt/prank, you also have the element of Immense Surprise. And the extra suspense during the build up.

One thing the jackass will be sure of is that his box ain't gonna arrive at the playboy mansion jacuzzi!! lol : P

Why not attach the box to a helicopter via a string and make it his ride of life. Once I attended the world skydiving convention in Quincy, illinois and they had a badass helicopter pilot that flew 20 meters above ground circling trees and houses. It was really scary! :D