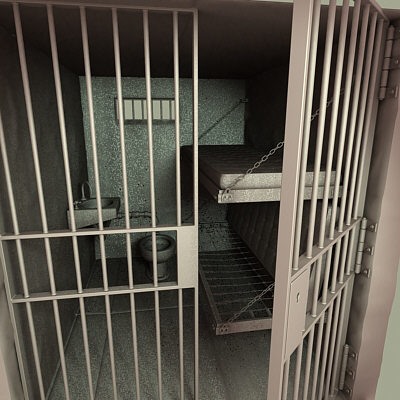 The key to this skit is to get someone incredibly drunk to the point that you can move them without their knowledge.  As soon as they pass out, dress them in an orange jumpsuit and take them to a prison or a studio made to look like a prison.  The cell-mate (actor) needs to be someone who looks like a big old biker, and is named "Sweetheart," who makes a lot of references to the victim's ass hole.   When your victim wakes up, they will be in the jail cell completely confused.  Sweetheart will say "Mornin' Sugar Lips," or something like that.  When they ask what's going on, Sweetheart will say something like "I don't know. They brought you in a couple of nights ago and you were screaming about something or another…"  At this point, an overly-aggressive guard will come by and bang on the door/bars saying "keep it down in there ass holes!"  Later on, the victim will be given visiting hours where they will talk through glass (on a phone) to one of the people in on the joke who will say "Dude, you fuckin' killed a cop, man!"  At this point they should be so confused that they are near the point of tears.  They will then be pulled into an interrogation room where the police will play good-cop, bad-cop, stating that the victim already confessed to the crime.  When he claims that he did no such thing, they will bring out a poor quality video tape, so blurry that the stunt double looks and sounds exactly like the victim, admitting to killing a cop in cold blood for "fuckin' up my high."  The cops will then inform the victim that due to the confession they quickly tried him the day before and convicted him of first degree murder.  Also, he apparently waived his rights for a lawyer at some point.  "You're lookin' at life….or death" one will say.  Later that evening, the victim will be back in the cell, avoiding the lascivious comments and looks from his cell mate, when a guard will come by, stating that the jury took 15 minutes to determine the death penalty, due to the fact that the young cop had twin baby girls and had lost his wife in a car accident earlier that year.  He will then pull the victim aggressively out of the cell, shackle his arms and legs, and start marching him down a dark hallway, while all the inmates cry "dead man walking!"  Your victim will be so scared shitless, he won't stop to think that his trial and conviction went awfully quickly. When they arrive at the room marked "execution" in big red paint, the guard will knock three times on the door.  The door will open and all the pranksters will jump out.