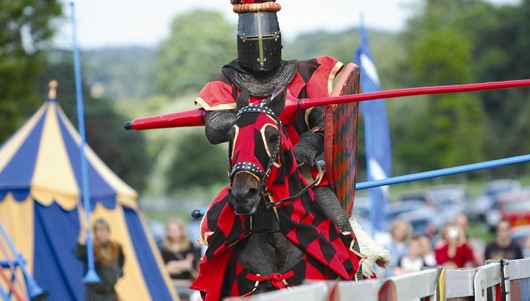 Build wooden horses for the boys to joust on. The horses are built from the shoulder up so they can be ridden low rider style, (and a fall won't totally take out a cast member. But if you feel like making scale wooden horses, be my guest.). The horses must have some sort of hard to control motivator on them, like a sheet of thick ice, casters, or I suppose regular skate board wheels would work. (but skateboard wheels would offer maybe a bit more control than I had imagined).


Each jouster will line up on opposite sides. (Duh! They aren't going skipping down a tulip path together.) You can either use gravity feed to joust each other or a powered tow line. I like the idea of a shallow ramp, say a 15- 20 degree grade, to allow the jousters to come at each other. But the tow lines would probably make it easier to pull the horse right passed each other.


Have an CO2 air cannon, rigged to shoot meat. It can be ground beef, corn dogs, whatever. (if you want to get really nasty you can put geeker in the air cannons. Geeker is 3-7 day old fish guts and by-products that we used to smear all over the rookie lifeguards out at Pensacola Beach, for a ceremony known simply as...The Geeker. And for the record, geekers sucks! It's nasty and I don't want to be near it. Which is why it might be perfect for Jackass). Also, the Air cannon barrel should be long enough to kind of look like a lance that would be used in a real joust.

All the pagentry of a real joust should be employed here. Tents, jugglers, hot chicks in corsets, fools, a crowd, and of course paint up the horses and lances to make them look killer. Maybe have a jousting tournament do a elimination style deal. Seems like the setting would really let the Jackass crew tart it up.


The idea here is similar to real jousting, each cast member gets one shot. As they ride their out of control horses into each other they have to line up a shot on the other guy. They can hide behind the horse a little bit, but eventually they have to let that Meat Joust rock!


I've never made a meat joust but it should work similar to a potato gun, but have a lot less force behind it. (a potato gun might kill a guy at that range).