Henry Goodelman we commend you, sir. You have stunned and baffled us ... more than any of the other 1000+ submitters to the Jackass 3D Prank Contest.

How could someone submit something so outrageous that we'd make special mention of it as a NON-WINNER? Well, Henry suggests.... rather, pleas that the boys attempt his unique stunt. 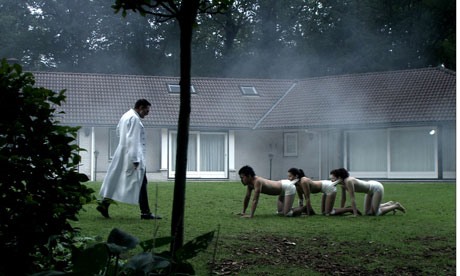 From the horse's mouth:

"I want the guys who are willing to do so to eat the same string, one after the next.

We'd need a really long string for this to work, but it definitely could, and we'd get the camera guy to puke eventually!

Seriously, one of the guys could simply eat a string, and digest it, and $%^ it out.

Following a string popping out with $%^, the string would eventually be long enough for another one or more of the guys to also eat the string as well, while it's still within the first guy.

After the second guy, if there was a 3rd, the string would be through the first two guys and available for the third.

Seriously, this would work. A real long string would seriously let this go down."

Henry, we take your word, but science, logic and fear of shredding our GI tract to bits prevents us from choosing to perform your concept. Thank you, however.

We love your originality, but this ain't exactly TV-safe.  According to research, the length of the small and large intestine combined is about 35 feet...the length of a school bus.  Per Concepts of Modern Biology by David Kraus, "the small intestine in adults is a long and narrow tube about 7 meters (23 feet) long. The large intestine is so called because it is wide in diameter. However, it is shorter than the small intestine - only about 1.5 meters (5 feet) long."  Yup, one could swallow that much thread.  Hygiene a little dicey.

With that said, Jackass Fans, do you have the winning prank idea?