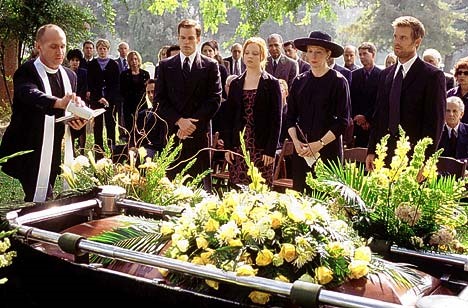 Have the Jackass crew go out to the club or maybe one of the members house, then tell one of the jackass members like Bam(Best choice) or anyone else to put a sleeping pill into another jackass members drink like Weeman(Best choice), and tell Bam  its for the prank contest,but really you would be pranking  Bam who is slipping the pill into WeeMans drink, then tell Bam that the pill works for only when  weeman falls a sleep tonight and it lasts 36 hours and when he falls  asleep(which he never will because the pill would be fake and the wee man will know that him the rest of a Jackass crew is pranking Bam)  so tell Bam that next morning they will take Wee-Man and fly him out to Hawaii and leave him on the mountain, since jackass members cant say (NO) Bam will do it..Wee Man is going to pretend like he is drinking it.

The day passes then Detective's will come over where Bam is spending the night and they will pronounce Wee Man's death and they will start questioning Bam and tell him that they already question the whole crew(The whole crew will know its a prank) and go along with it, so  Detectives will tell Bam they found a roofie or any other pill that kills, and tell him Wee man never woke up, then they should ask him if he knows anything about it, He will start freaking out set the cameras all over the house and leave him alone inside the house later detectives will leave the house after all the finger prints taken.  Set up the funeral on the same day or the next ,get the whole crew to come out from Big Brothers, Nitro Circus, some pro skaters that knew WeeMan... make it into a real scene get a mini casket get a face picture of wee man make a big portrait, put make up on Wee Man like he is really dead, get people dressed in suites,make some women cry in the back so Bam wont see them that they are faking it, then make people come up and give wee man roses and let them say last good byes, when Bam comes up to say last good bye..someone will screm oh no, thats when Wee man gets up and says WELCOME TO JACKASS!

make it identical to Jackass number 2 with the taxi driver and the bomb in the end.

This will be great I know Jeff Tremaine and the rest of the crew can do this!

Make My 8 year dream come true, and me spend the day with the Crew