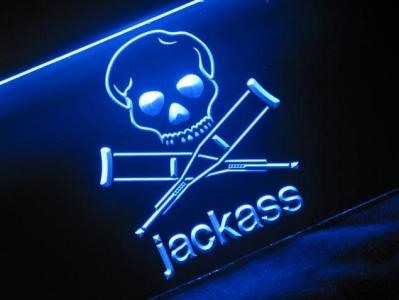 The idea is Chris would introduce himself and the title of the game. He'd put on antlers and run out in the woods. All the other Jackass members would be the deer hunters and have tazers and need to hunt him down in the woods and shoot him. (A chasing game)

The idea would be Johnny is walking down the street decked out in gangster schwag and offer people drugs (sugar pills or whatever else) and act tough in front of a busy street corner downtown. Or make a fake drug deal in front of a cop and then run as fast as they could away from the cops to see their reaction.

The idea would be Steve-O skating with a skateboard strapped to his feet and rockets on each side. (or rollerblades/skates) going down a ramp into a pond.

Weeman and Preston: Who's the dwarf now?

The idea stems from the original concept of Weeman always being chased by Preston, but in this version Preston is minding his own business and he sees Weeman. Weeman takes off as usual around a corner and you see tons of dwarves around the corner with paintballs. This sketch would be a setup, Preston knows the skit, but doesn't know about getting hit with paintballs when he runs around the corner, so the reaction would be genuine.

The idea is you take all the members of the Jackass crew, put them in a large open field and have them run. Bam comes in on a helicopter shooting pepperspray paintballs at them, and the last standing in the winner. Also paint the targets with bulls eyes. (Paint everyone)