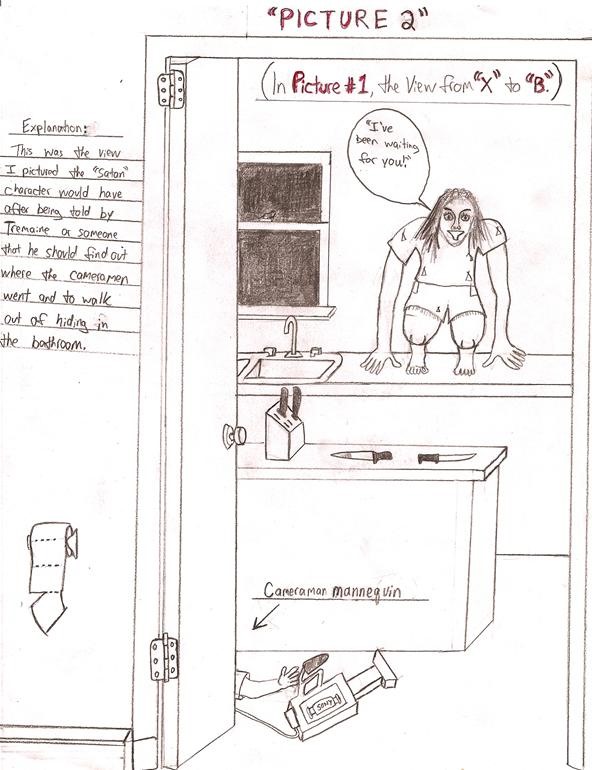 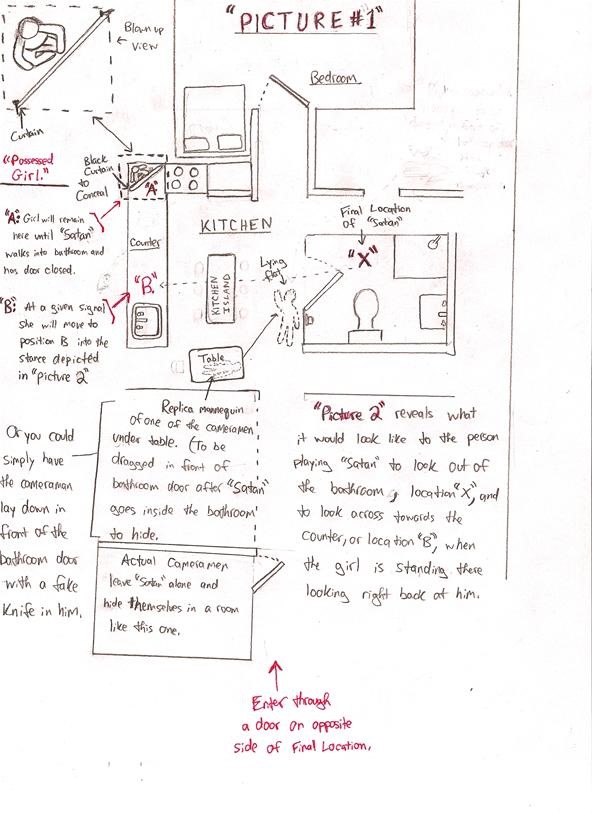 Synopsis: Tell one guy that a girl that one of the other guys knows just had some sketchy demonic encounter/satanic experience at some Wicca gathering she went to last night while she was trying to get answers from the past. Then say she's incredibly creeped out right now and is home alone tonight so they are going to seize the opportunity(while she's still scared) and have him dress up as Satan himself and go to her house late at night and "appear" to her in her bedroom. (Don't be overly descriptive in telling him about her situation or he won't by it.) Say: "Dude get this, so Jenna just went with her Wiccan friend to some weird festival last night to get her fortune read or something like that and she had some weird satanic experience and she's so sketched out right now." Note: For simplicity purposes I will refer to the girl as "Jenna" and the guy who thinks he's going to be scaring her as "Satan." Due to the fact that he thinks he's "in" on the prank he won't suspect the prank is actually being played on him. (The "Jenna" character will be "in" on the prank and its actually going to be her scaring him.)The premise is that the "Satan" character will go to Jenna's house with a camera man late at night and the "Satan" is going to hide in a bathroom of Jenna's house at a given point(with door closed),  lose contact with his cameraman in the house, hear "Jenna" haunt/stalk the cameraman, hear the cameraman plead with her, and then hear a heavy mannequin collapse to the floor and a fake version of the cameraman's $30,000 crash to the floor as well. A large chunk of cow meat could possibly be stabbed to make it sound like "jenna" stabbed the cameraman. When the director orders "Satan" to emerge from hiding in the bathroom to find the cameraman he will find himself alone and encounter "Jenna," dressed like a psychopath, ready to pounce from the counter at him, AND with a very deep, demon-like voice; the effect of having her inhale Sulfur hexafluoride gas before speaking to him,( similar to helium but opposite in effect.) Having her say creepy things to him like "Ive been waiting for you" with that voice will be enough to scare him, she won't need to chase him. To prevent "Satan" from being able to turn on the lights in the house when the prank is flipped on him brief "Satan" ahead of time that they will cut the power in the house to make it more horrific for "Jenna," if and when she tries to turn on the lights herself. I think he will actually think she's possessed because he really wouldn't think to realize that the prank might actually be on him due to the fact that the "Satan" character thought he was "in" on the prank in the first place. Especially due to the fact that he's never encountered anyone before with a voice of the sinister quality that Sulfur hexafluoride will provide.  Anyone who has heard  someone speak after inhaling Sulfur hexafluoride can imagine how traumatizing it would be to encounter someone who just inhaled it speaking to you when you're all alone in the middle of the night.

Wait, what is sulfur hexa-fluoride? Sulfur hexa-fluoride is a gas that is five times denser than air, thus, after inhaling it the sound waves being created  when we talk have a much more difficult time navigating the thicker gas as they exit the vocal tract. This makes the voice of the person who inhales the gas to seem five times deeper than it normally would sound. If you do this with a girl who has a pretty deep voice to begin with when "Jenna" finally does encounter "Satan" and says something threatening to him in an inhumanly deep voice, human reasoning will tell "Satan" that he might not be listening to a girl anymore but possibly a demon speaking through the girl. If he doesn't believe that she could possibly have disposed of his fellow cameraman, when he hears her speak in a voice so deep and sinister that no human could possibly speak in otherwise I think he will become convinced very quickly he might be in trouble.

Setting: (Just find a location that fits this description you don't need to build a house); The prank will be done to "Satan" at Jenna's slightly run down house;The house should be a single story rectangular house with a long dirt driveway in a rural area with not many neighbors. Have the house be in the middle of nowhere so it appears sketchy.The house should be isolated by trees on all sides to prevent view from other houses or other sources of human life. (Away from paved roads, street lights,etc.) The "Satan" character needs to feel as alone and out of reach of neighbors as possible. All the lights will be off in the house as well. All parties will have earpieces so the director can coordinate their cues and improvise.

Suggestion: Jackass is comedy, not horror. I did not intend for this to be a visually gruesome scene. I personally think stabbed replica mannequins aren't needed but people might think they could add to making the "Satan" believe he is in danger. I revised this skit from the original pictures because it is so sketchy already.  I formerly had a meat stabbing sound effect and the pictures indicate leaving a cameraman replica on the ground but it just starts to make the prank creepy to all parties involved.  This was a blast to write not going to lie.