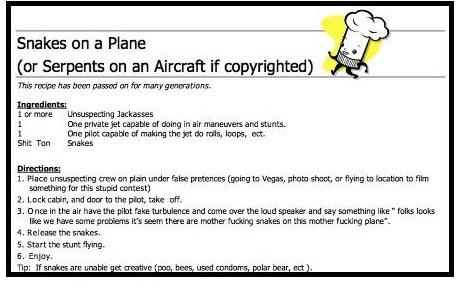 Snakes on a Plane

(or Serpents on an Aircraft if copyrighted)

This recipe has been passed on for many generations.

One private jet capable of doing in air maneuvers and stunts.

One pilot capable of making the jet do rolls, loops, ect.

1.   Place unsuspecting crew on plain under false pretences (going to Vegas, photo shoot, or flying to location to film something for this stupid contest)

3.   Once in the air have the pilot fake turbulence and come over the loud speaker and say something like " folks looks like we have some problems it's seem there are mother fucking snakes on this mother fucking plane".