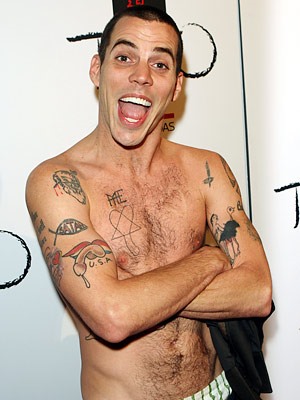 So, everytime I see Steve-O eat something he always throws it back up. That's how he must be so skinny. I don't know. Any who, I think a good skit for you guys to pull would be for Steve-O to eat all kinds af crazy shh---stuff ;-) and not throw it back up. If he throws up he has to eat more! The other cast members of Jackass should chose what to feed poor Steve-O. Oh I just thought of one thing... I guess it was a better idea to throw up the live gold fish rather than keep it down... otherwise PETA would have been all over your (Jack)Asses!

I hope you pick mine! You guys are awesome! You need a girl in your skits doing pranks with you. Hint, hint, wink, wink. ;-)