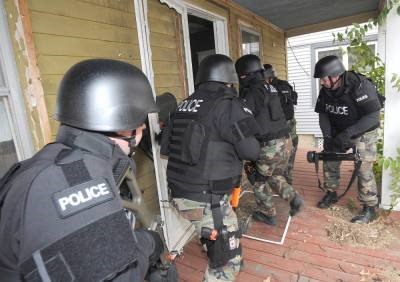 Step 1. Have the victims of the prank just engaging in a normal everyday activity such as going out to eat at a restraunt or whatever.

Step 2. Stage a police situation in view of the prank victim but dont make it a spectacle. (traffic stop) whatever

Step 3. When you arrive to the destination make alot of noise from the area where the police incident was occuring, (girls screams) (police commands) (police radio) ect

Step 4. Have the Suspect run into the location of the initial Prank victim is and have it turn into a stand off situation and take everyone hostage. (requires quiet a bit of extras that can act scared) and acting from the accomplice(s)  Police cars/gear, have a bull horn and helicopter if possible, fake news crews.

Step 4. Play it out completely legit (fire blank rounds) (have a negotiation phone thrown in) (alert all nececerry people so that the real cops arent called, that wouldnt be good)

Step 5. The main prank victim is targeted by the suspect and is picked up and held at gun point while talking to cops and barking other demands.

Step 6. The Conclusion...Flash bangs are thrown in and the SWAT team storms in and the suspect is arrested and then the team unmasks themselves and it is the Jackass cast and other friends of the Victim. If properly planned and executed it would be epic.