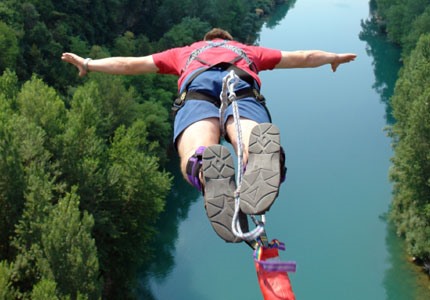 Alright, so while I can't claim to be a huge, oh my god there's Steve-O jump for joy everytime a new Jackass movie comes out, fan, I do enjoy watching the show. Now, there's a prank that I would never have the means nor balls to pull on someone I know, but those kind of pranks seem to be the Jackass bread and butter, so here goes nothing.

I got this idea maybe a month and a half ago. The first step of this plan would be to somehow make one of your friends unconcious. I'm not asking questions as to how he gets that way, could be he drinks to much, could be someone snuck a little chloroform under his nose, it doesn't really matter. What matters is that he's unconcious.

Step two would involve the prankers taking him somewhere, such as a bridge or cliff where bungie jumping typically occurs. Somewhere a bungie jump could not go wrong, even if the person jumping had no idea what was going on. Hook the person up to some bungie equipment, attach a blindfold, put them in a sitting position facing the ledge, and wait.

Once the target begins to stir it may be prudent to wait until he realizes that he can't see anything. Once the person manages to take off the blindfold, give em a push. Now then, I realize that this mean beyond reason, but I feel like it's something that should be done, and that this group should be the ones to do it.

That's my prank, and I think it's a pretty damn good one.