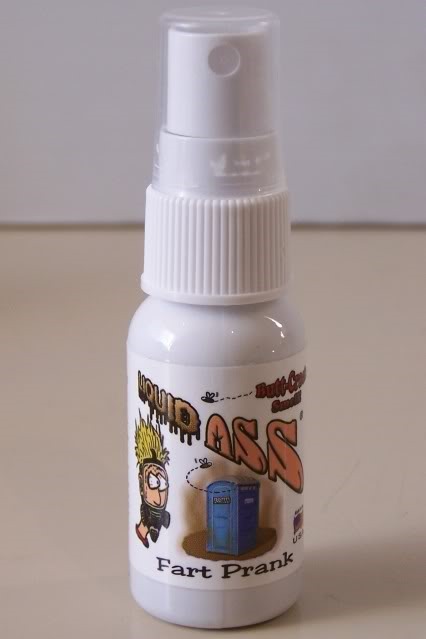 Have a guy go into an enclosed area with a bunch of people such as an elevator or a public bus/taxi.   Once in, secretly take out a bottle of 'Liquid Ass' and either spray a bunch or if it's a liquid spill some drops on the floor.   Once the smell gets really bad and people are gagging or about to throw up...basically look around saying it wasn't you and blaming other people (such as the women).

Either that or do it in a crowded elevator but before you do the above, put brown paint or mud on your jeans on your ass so it looks like you've shit yourself already.

Or you can also just spray it on someone's face or right in front of them as they are sleeping...it'll wake them up gagging :)

My friends and I used to do this on the elevators at the mall. Its pretty funny, but it doesnt last for long 'cause they get off the elevator pretty quick. So, we started holding the doors at the top or bottom so when they elevator got to the bottom the doors wouldnt open and it would go back up.

yah i agree but also if it's in an elevator...even smelling it for 2 floors will feel like forever :)

Possibly, but its not very original and it is pretty easy to do. This is Jackas. They've got money and the resources to do something big. I can and have done this on my own just for a laugh.