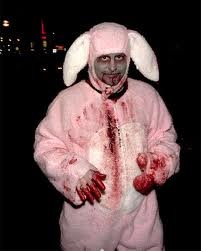 A few people are in a public setting: eating lunch at an outdoor patio, waiting outside

a movie etc.  Optimally there would be two groups of people in on the prank spaced 10-15 yards apart.  Into the scene runs a zombie and bites someone in group one on the arm where it has been rigged to spray blood.  The zombie then begins to run off but bites one of the people in group two on the neck where it also begins to bleed profusely. The zombie then sprints off out of the scene doing what ever crazed antics zombies do leaving these two people bleeding from the zombie attack.